Nen (念, Mind Force) is a technique that allows a living being to utilize and manipulate their own life energy (known as aura) into anything they desire but it is mostly used as a form of combat. The word "Nen" or "Ki" can also be used in conversation to refer to aura.

Aura is the life energy produced by all living bodies vital for survival. It is a latent ability that can be very powerful if used correctly and can be wielded by any sentient being to perform supernatural feats. Aura releases from all parts of the body and has a tendency to flow together, producing one cohesion mass of energy. This happens without the individual's awareness, typically resulting in a slow leak of aura continually escaping the body, causing aging. If one were to lose their entire aura, it would be equivalent to using up all the energy keeping them alive, which would be fatal. The microscopic pores or points on the body from which aura flows out from are called "Aura Nodes (精孔, しょうこう) shōkō)." Controlling those nodes is the first step to being a user of Nen.

Learning to use Nen is one of the requirement to enter the Gourmet World because it increase the user's chances of survival.

A student learning Nen trains to manually open and close their aura nodes so that they can control the flow of their aura. One typically learns this process slowly and gradually through meditation. The second method (colloquially called Initiation or Baptism) is by having one receiving an influx of aura from an experienced user that forces these nodes to open; despite how quickly it works, the method is typically frowned upon due to its danger to the student if the user is inexperienced or has malicious intent. Initiation via physically attacking another with the use of an enhanced aura typically causes permanent disability or death.

There is, however, a way to initiate that is less harmful to the student's body — depending on gently jolting open one's nodes forces the new user to learn to control their aura flow, else risk suffering severe exhaustion or death. Once one has opened their aura nodes, he will be able to see his own aura as a shroud surrounding the body due to his nodes in his eyes being opened. Aura appears to look similar to steam from a kettle.

Aura is is a tangible It is possible to feel it. It has been described as feeling like a warm, viscous fluid at rest. It has been said that powerful, refined auras produce a sensation that feels akin to needles pricking into the skin. Since every living being emits aura subconsciously, learning to sense aura is a useful skill for those tracking living things or hunting non-living things infused with aura. An experienced user of Nen can judge the location and relative strength of his opponents through reading the output of their aura.

Nen is like any other skill, in that there are those who will learn it faster than others. Some are able to discover and learn to manipulate their aura on their own without having formally learned it. These individuals are typically known as "geniuses," "psychics," or "super-humans" to the public. This can be anything from inadvertently being able to use the basic techniques of Nen or unconsciously developing a unique Nen ability that can be used without really understanding how or why one is able to do so. Typically, geniuses of Nen are exceptional artisans in their own fields and their abilities are related as such.

Aura comes in a variety of colors. The most common color in the is white; other colors include yellow, red, purple, orange, blue, green, pink, and black. These colors vary on the race, user emotion, technique being used, species that the individual is, and/or the purity of the user's heart. It can also resemble electrical sparks or even sparkles of light.

Auras radiate from the user when increasing the concentration of it inside their body. Those with more experience can easily generate large amounts of aura within seconds. Nen users have a limit to the aura that their bodies can withstand, but the capacity for aura can be increased through mental and physical training. Once utilize, the user gains the ability to enhance their body parts such as: physical strength, speed, endurance, healing rate and can channel their aura to an object to increase the power of their attacks to inflict greater damage to opponents depending on the quantity of aura employed and an individual's aura type, as well as allows for para-psychological abilities to exist in reality.

Although the production of aura is unconscious and constant by all sentient beings, it is not only life energy. Aura carries with it the desires and emotions of the one who deploys it, which is what allows for Nen to have incredible versatility to those who develop their skill at using it, and also heavily influenced by mental condition and emotional state. A basic application of this phenomenon is that one can channel their aggression or malice into their aura and deploy it towards another person (i.e. blood-lust). The antagonized will then be able to feel that blood-lust as if it were physically palpable; if unable to keep it from their own body by deploying their own Nen, he/she may be physically harmed by it. Another example is an increased of strength.

Being a product of the mind, Nen responds to the goals, strengths, and desires of individual users. As a result, a student of Nen can increase the overall power of an individual skill by stating a self-imposed restriction that forces even more conditions on it. For example, if one consciously decides something along the lines of "I will only use this skill on Thursdays" or "I will only use this skill against short people" and manages to abide by that rule, that particular skill will become stronger. These conditions are called "Vows (制約, Seiyaku)" or "Contracts". The stricter the Vow, the more one's own ability is strengthened. It is also implied that Vows that carry great meaning or are tied to emotional states also bring about a greater benefit. However, Vows are also considered liabilities, since breaking a Vow carries the risk of completely obliterating one's own Nen abilities.

Though Nen is influenced by one's mental condition and emotional state, it is difficult to judge exactly how these factors affect Nen. In certain instances, these factors may even lead to one exceeding the 100% limit cap. However, one using his powers beyond their capacity will ultimately cause strain. Potentially, this could become either a weakness or fatal to the user. Hugo is the example of exceeding the 100% limit cap after he enters on rage state that Neferpitou cannot bring Kite back as his wish which makes him totally off guarded from any type of attacks.

Nen also does not necessarily disappear following death. In fact, sometimes death can reinforce an ability's strength. If someone dies holding a deep grudge, his Nen will remain and seek out the object of his hatred.

In order to fully grasp Nen, one must first learn the Four Major Principles of the Shingen-Ryu school of Kung-fu. Everything else, including a practitioner of Nen's individual skills, is based on the basic manipulations of one's aura flow. The Four Major Principles, in order of study, are: Ten, Zetsu, Ren, and Hatsu.

These basic techniques become second-nature to those experienced in Nen. For example, a beginner must learn to use Ten and concentrate to maintain it; whereas someone with experience will practically always be in a state of Ten, even during sleep.

There are six types of aura; every individual is born having one of these six different aura types. Upon learning one's own aura type, a student of Nen can set about learning to apply the technique in a unique way that suits their personality, which can develop into a unique skill.

The most popular way (and the only sure-fire way) of determining one's aura type is through water divination. Divination requires one to float a leaf atop a glass of water. A student of Nen will place their hands around the glass and perform Ren. The resulting effect from one's aura contacting the glass will determine a person's aura type.

It is best to base a Nen ability on one's individual aura type. Though it is possible for one to develop abilities outside of his primary aura type, one is typically less proficient at using those abilities and requires more training.

There are numerical approximations given by the manga to indicate just exactly how efficient one would be at using aura abilities that one is not born into. Starting at one's own aura type, one has the potential to be 100% efficient at using abilities based in that category alone. Then looking at the category chart (see right), one has the potential to be 80% efficient at using aura types adjacent to your primary type, 40% efficient at the opposite or farthest category, and 60% efficient in the two remaining categories. Specialization is typically unusable for non-Specialists because it is impossible to partially use; one either can or can't use Specialist abilities. However, Conjurers and Manipulators have 1% efficiency potential for Specialization due to being adjacent to it. 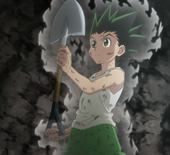 Ryu
Retrieved from "https://0zloinhytf.fandom.com/wiki/Nen?oldid=4554"
Community content is available under CC-BY-SA unless otherwise noted.